Many of us have a strange tales to tell, stories of uncanny coincidences or premonitions. Yet,  US presidents are more likely to find themselves enmeshed in  weird and ironic circumstances. They live anomalous lives and are no strangers to the bizarre. Enjoy our list of strange facts about US presidents. 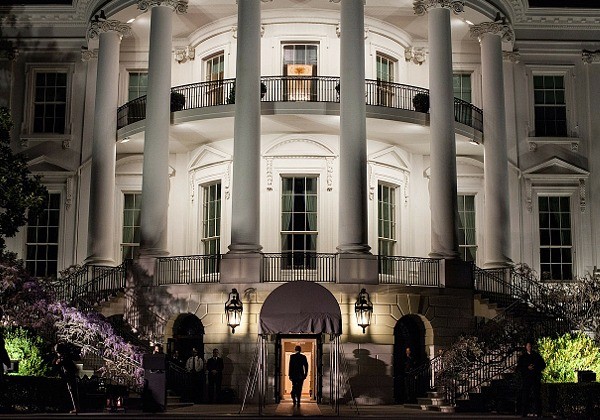 Did George Washington say, “I cannot tell a lie”?

Synchronised Deaths: Did John Adams and Thomas Jefferson Die on the Same Day?

Thomas Jefferson left precise instructions regarding his tombstone and epitaph. He even provided the design for his gravemarker and the words to be inscribed upon it. “Because by these,” he wrote, “as testimonials that I have lived, I wish most to be remembered.”

“On the faces of the Obelisk the following inscription, and not a word more:” 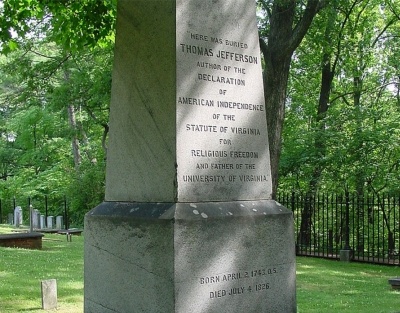 Madison Rejected Measures to Delay His Death Until July 4th

Many American’s viewed the deaths of both John Adams and Thomas Jefferson on Independence Day, 1826, as a sign of the new nation’s divinity. The death of James Monroe — the fifth US president — on Independence Day , 1831, seemed to provide confirmation.

As James Madison lay dying in June, 1836, his doctor suggested that he take stimulants to delay the inevitable until 4th July.* Madison refused the offer and died on 28th June, six days early. This raises an obvious question: if Madison’s life had been successfully prolonged, what further measures was his doctor prepared to take to make certain Madison died on Independence Day?

Had the late president survived until 4th July, the second, third, fourth and fifth presidents of the USA would all have died on Independence Day.

As a boy, Jennings had accompanied Adams to the White House to eventually serve as a footman and Madison’s manservant. Jennings purchased his freedom in 1847.

His memoir, A Colored Mans Reminiscences of James Madison, was published in 1865. In it, Jennings provides an eyewitness account of the evacuation of the White House during the War of 1812 and Dolley Madison’s heroic effort to rescue George Washington’s portrait.

John Quincy Adams Liked to Skinny Dip in The Potomac

The sixth president of the United States, John Quincy Adams, had some very odd hobbies and habits. Most notably:

What a Temper! The Andrew Jackson Duels

Martin Van Buren, the eight president of the United States and first to be born a US citizen, spoke English as a second language. In fact, he didn’t learn to speak English until he went to school and never lost his Dutch accent.

Van Buren and his wife, Hannah, also raised in  Dutch home, prefered to speak Dutch at home and in the White House.

John Tyler Was the Only US President to Join the Confederacy

John Tyler became the ninth US president following the death of William Henry Harrison. He was America’s first unelected president and only president to support the confederacy.

Tyler was elected to the Confederate Congress as a representative from the State of Virginia but died before he could attend the first session.

Widely regarded as a traitor, Tyler’s death was not acknowledged by the federal government until the twentieth century.

The Curse of Tippecanoe (The 20 Year Presidential Curse)

Did James Polk Work Himself to Death?

It’s amazing that Polk remains one of the lesser known US presidents. The circumstances of his election and accomplishments as a president are fascinating.

Elected in 1844, the eleventh and youngest president of the USA to that time, Polk was enthusiastic and full of vigour. Many scholars argue that achieved more then any other president during a single term, managing to to promote and execute almost every item on his agenda.

Polk had a reputation for being a tireless worker, working up to eighteen hours a day and spending ten to twelve hours at his desk. He rarely left Washington, and it’s been estimated that took less than thirty days off during his administration. He had this to say on the matter:

“No President who performs his duty faithfully and conscientiously can have any leisure. I prefer to supervise the whole operations of the government myself rather than intrust the public business to subordinates, and this makes my duties very great.”

Polk did not run for reelection 1848. He left office frail and exhausted in March, 1849 to undertake a triumphant tour of the south. While on a Mississippi paddle steamer, he took ill and was hospitalised. It was feared he had contracted cholera. When a doctor assured Polk he did not have cholera, he left hospital to continue his tour. He finally arrived in Nashville where he was greeted enthusiastically on 2nd April.

Polk passed away in June, barely three months after leaving office. It’s now widely accepted that cholera was the cause of death. 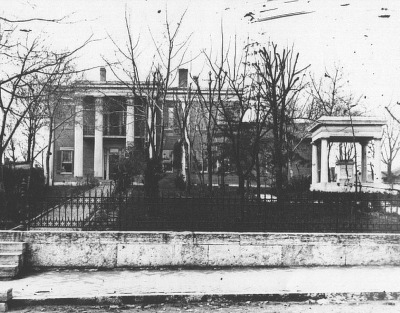 Zachary Taylor, a military commander known as “Old Rough and Ready”, refused to vote in presidential elections because he didn’t wish to cast his vote against a potential commander-in-chief.

Prior to 1848, Taylor had never expressed an interest in politics or his support for a political party. It was in that year that Taylor, popular in both the North and South, was approached by a number of political parties – including Whigs and Democrats – to become their presidential candidate

When pressed, Taylor confirmed his political views were most closely aligned with those of the Whigs.  He became their candidate at the 1848 Whig National Convention and chose Millard Fillmore to be his running mate.

Taylor defeated Lewis Cass and Martin Van Buren in the presidential election that followed and became the twelfth president of the United States.

Was Zachary Taylor the First US President to be Assassinated?

Zachary Taylor died after serving only four hundred and ninety-two days in office. Only William Henry Harrison and James Garfield had shorter tenures. On Independence Day, 1850, Taylor was attending a fundraising event at the incomplete Washington Monument. Contemporary reports indicate that he consumed large amounts of raw fruit and iced milk. He fell ill that evening and died five days later. His personal doctor diagnosed his illness as cholera morbus – a generic term for a diverse range of gastro-intestinal ailments, including dysentery and bloody diarrhoea. Almost immediately, rumours that Taylor had been poisoned by pro-slavery Southerners gained traction and persisted into the twentieth century. On 17th June, 1991, the remains of President Zachary Taylor were exhumed and taken to the Kentucky Medical Examiner’s Office. Tissue samples including teeth, hair and fingernails were removed and subjected independent examinations, including Neutron activation analysis at Oak Ridge National Laboratory. Reports concluded that Taylor died from natural causes – probably acute gastroenteritis (cholera morbis) as indicated by his personal physician. There was no indication of arsenic poisoning. It was further noted that harrowing treatments administered by his physicians had hindered any chance of recovery that Taylor may have had. More recently, Michael Parenti, a political scientist, has quoted a number of forensic pathologists to claim that the 1991 tests used to detect the presence of arsenic were flawed. Don’t expect this conspiracy theory to be put to bed any time soon. 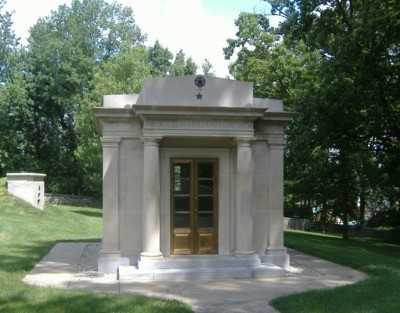 The Millard Fillmore Society Was Founded to Celebrate Fillmore's Anonymity

Founded in 1963, The Millard Fillmore Society met each year on Fillmore’s birthday to celebrate his anonymity and to present its Medal of Mediocrity.

Millard Fillmore became the thirteenth president of the USA upon the death of Zachary Taylor. Fillmore, a weak and indecisive president, lacked the leadership skills necessary for high office.

It’s been said that he had to be tormented in to making decisions and that the decisions he made were almost always disastrous.

His lack of leadership and judgement during a critical period in the relationship between Northern and Southern states helped plunge the nation into civil war.

Ironically, due the work of The Millard Fillmore Society, he is no longer an anonymous president and has been frequently compared to unpopular, modern incumbents.

Franklin Pierce: "The Hero of Many a Well Fought Bottle”

Scott had been Pierce’s commanding officer during the Mexican-American war but was easy pickings in the 1852 presidential election. It would have been better for the USA if Scott had won. Pierce, like Fillmore before him and Buchanan after him, rank highly on almost every list of the worst US presidents. Together, they made The Civil War inevitable.

Pierce, a heavy drinker and president you wouldn’t want in charge of the nuclear codes, died from acute severe cirrhosis of the liver in 1869.

James Buchanan, the only US president to never marry, is often regarded as America’s worst president.

Known as ‘Doughface’ – a Northern politician who favoured Southern political positions – Buchanan refused to address the expansion of slavery or the rise of the group of states that was to become The Confederacy.

Buchanan was the fifteenth US president and last to hold office before the outbreak of The Civil War.

During his final years, Buchanan said:

“History will vindicate my memory from every unjust aspersion.”

Good luck with that. 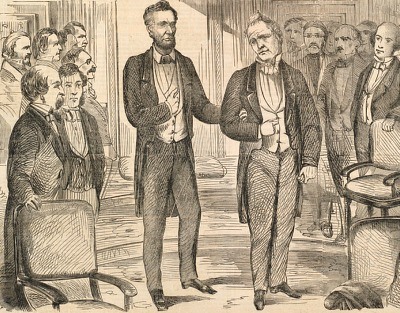 Andrew Johnson: The First US President to Be Impeached

Following a number of unsuccessful moves to impeach Johnson, the seventeenth president of the USA was finally impeached on 24th February, 1868.  It wasn’t even close – the vote was 128 to 47.

Eleven articles of impeachment were adopted. The most serious accusation facing Johnson was that he had challenged the constitutional legitimacy of Congress by violating the Tenure of Office Act.

On 16th May, the Senate found the president guilty by a vote of 39 – 19  on the 11th article of impeachment, which charged Johnson with firing Secretary of War, Edwin Stanton, in violation of the Tenure of Office of Act. However, as a two-thirds majority was required to convict the president, he was acquitted.

Ten days later, the Senate returned to decide on the second and third articles of impeachment. The results were identical, 35–19, and further proceedings were dismissed.

Accusations of deal-making and bribery were widespread. Yet, it’s possible the main reason Johnson survived was because his replacement would have been Ohio Senator, Benjamin Wade, the president pro tempore of the Senate. Wade supported women’s suffrage and other measures considered to be outrageous.

President Ulysses S. Grant Wrote a Memoir to Save His Wife from Poverty

Ulysses S Grant, legendary Civil War general and 18th president of the USA, was broke and worried about his wife’s prospects when he was diagnosed with cancer in 1884.

Mark Twain, Grant’s great friend and admirer, understood how parlous Grant’s heath and financial prospects were when he offered him an unheard of seventy-five percent royalty to publish a memoir. (Grant had already been considering a ten percent royalty offer from another publisher.)

President Grant died only a few days after completing his memoir, which focused his early life, The Mexican-American war and the Civil War.

Grant’s memoir was an instant bestseller and Mark Twain was pleased to present Julia Grant, the president’s widow, with approximately $450,000 in royalties, a great fortune at the time. 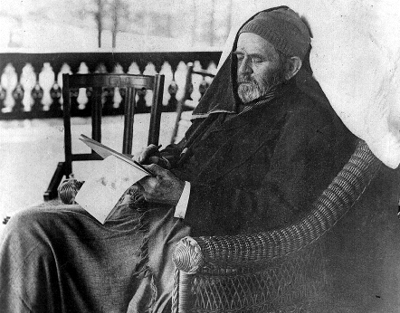 Grant working on His Memoir
Only Weeks Before His Death

15 thoughts on “Some Strange Facts About US Presidents”